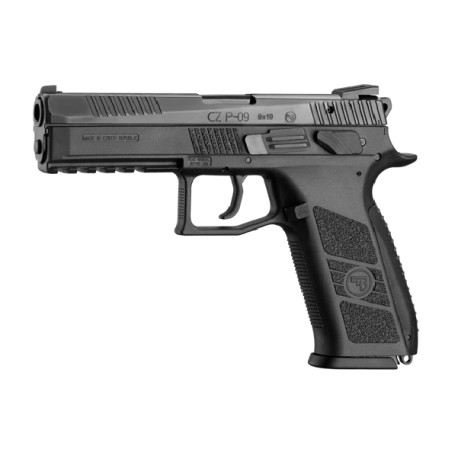 The ground-breaking service model CZ P-09 was created on a basis of the long-lasting cooperation with many operatives from armed forces the worldwide. It was stressed that the maximum reliability and accuracy is of paramount importance, while a special attention was paid to the shooter’s comfort and ergonomics of the weapon. At the end of its development the CZ P-09 successfully passed many extremely demanding tests in harshest environments, these tests far surpassing the common military and service standards.

Innovative materials
A modern, mechanically and thermally extremely stable glassfibre-reinforced polymer has been chosen for the frame of the CZ P-09. The new surface finish of the slide, barrel and other minor parts markedly increases the weapon’s resistance to any mechanical damage as well as to corrosion.

Shooter’s comfort
Drawing the gun, aiming and working the trigger is very intuitive. The recoil has been minimised, the weapon returns to the target naturally even during rapid fire. The ergonomics of the pistol has been brought to high standard by the overall rounding, removal of sharp edges and addition of the front cocking serrations to the slide. Also the new shape of the trigger and hammer has been arrived at to improve the shooting comfort and handling of the gun. The interchangeable backstraps in three sizes (S, M, L), allowing to adapt the weapon to the shooter’s personal requirements, are part of the package. The pistol has an extraordinary capacity of 19+1 rounds of 9x19 calibre, or 15+1 rounds of .40 S&W calibre, respectively. As a standard the new steel sights with three luminescent points of long luminescence are fitted.

Omega
Retained is the well-proven Omega trigger mechanism, which allows, besides other advantages, an easy selection of the safety features of the weapon – choosing either a manual safety or decocking. The safety levers are ambidextrous, also the magazine catch could be handed as preferred. Every single weapon is factory-zeroed to 25 metres, the test target sheet is included in the package.